As promised during the group outing to the Abandoned Turnpike this past spring, I’m putting together a group road trip to Centralia and Concrete City this coming fall.  I really wanted to do something sooner, but there’s no way I wanted to risk having anyone succumb to heatstroke.  Besides, both places look 38% cooler in the fall anyway.

If you don’t already know, Centralia is a tiny town about an hour north of Harrisburg.  In the 1960s, a trash fire ignited a coal vein and started an underground mine fire that has been burning ever since.  During the winter months, the ground can be hot to the touch.  Smoke escapes from vents and cracks in the ground year-round.  Trees are bleached white and the entire valley reeks of sulfur.  A four-lane highway — PA Route 61 — was abandoned in the mid-90s after a land subsidence destroyed the road.  Several years ago I flew a Cessna 172 up there, and from the air the “town” is an eerie patchwork of long-abandoned paved streets. 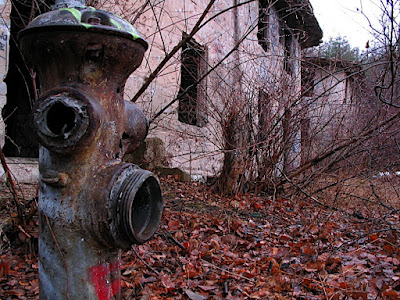 Concrete City is, in a word, depressing.  It is a series of concrete homes built in 1911 for use by management of a Nanticoke coal mine.  And when I say “concrete homes”, I mean that they used poured-in-place concrete.  Not cinderblocks, not just concrete foundations, not just concrete shells, but the entire house — literally every square inch of every wall, floor, and ceiling — is cast-in-place concrete.  Local lore states that the city of Nanticoke tried to demolish the buildings for safety reasons, but generous use of TNT only succeeded in lightly damaging one building.  As such, they were deemed too expensive to demolish and left alone for nearly a century.

Both of these locations provide ample, unique photo opportunities for documenting severe urban decay and a tiny fragment of some of the more unusual history of Pennsylvania.  If nothing else, they both just look cool.

I don’t have an exact date yet, but I’m thinking it will be a Saturday in late September with an alternate date in early October.  As with the Turnpike Hike, both of these locations carry some risk of serious injury.  Concrete City itself is especially dangerous; those buildings haven’t seen maintenance in well over half a century, and a number of them are leaning badly.  Because of the nature of both of these places, this probably isn’t a good trip on which to bring small children.

Centralia is about an hour up I-81.  Concrete City is about another hour past that.  And the return trip is just over 90 minutes.  Driving will be about 85% Interstate, and we’ll obviously be carpooling.  The plan is to leave Harrisburg early in the morning, spend some time in Centralia, stop in Hazleton or Wilkes-Barre somewhere for lunch, visit Concrete City, and then head home.  This will be an all-day, 8-to-5-ish trip.

Type to search or hit ESC to close
See all results