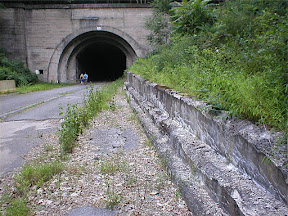 There’s a movie coming out this November that features everybody’s favorite 13-mile stretch of abandoned highway.  The abandoned Pennsylvania Turnpike was used as a major filming location for The Road due its post-apocalyptic appearance and relative isolation.  Look at slides #6 and #4 of the USA Today slideshow, and you’ll see the eastern portal of the Rays Hill tunnel and the bend as they approach one of the tunnels, respectively.

I’ve covered the history of the abandoned turnpike extensively in previous posts.  In case you missed them, the abandoned segment of the PA Turnpike lies just east of Breezewood.  In fact, that short, awkward drive as you get off the Turnpike at the Breezewood exit is actually part of the old Turnpike.  You can even see the remnants of the old Breezewood exit.  Most of the abandoned segment — from Route 30 to Pumping Station Road — is owned by the Southern Allegheny Conservancy and is open to the public, although you’re visiting at your own risk.  The tunnels are still more or less in-tact, and contain lots of exploratory goodness. 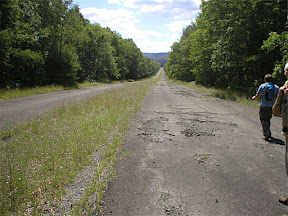 If you do plan on visiting, remember that the area is not maintained in any way, so take the weather into consideration.  Although the tunnels are open, they contain areas (including the ventilation shafts above and the drainage tunnels below) that are extremely dangerous and pose considerable potential for death and/or serious injury.  Don’t explore alone.

To get there, take the Pennsylvania Turnpike (I-76) to the Breezewood exit.  Take Route 30 East for approximately 3 miles.  At the sign for 915 South, turn left onto the unmarked gravel road.  Bear right and follow this road down the mountain until you see a gravel parking lot on your left.  The abandoned Turnpike will be clearly visible.  As you walk to the Turnpike, the Sideling Hill tunnel — the longer of the two — will be to your right (east), while the Rays Hill tunnel will be to your left.  You’re about halfway between the two, but I think Sideling Hill is more rewarding. 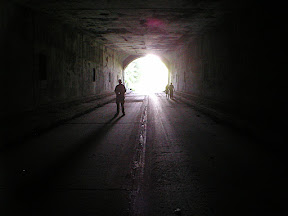 If you do plan on hiking through the tunnels, bear in mind that they are pitch black; you will need powerful flashlights.  A single 4D Maglite will be barely adequate.  Also, the hike can appear deceptively easy.  It’s 26 miles (round trip) of pavement, but if you’re not wearing decent shoes, it’s going to be a very unpleasant walk.

Stop by the Sheetz in Breezewood and grab some subs / some ice / a cooler before you go, and stop at your car for a picnic on the way back from the first tunnel.  Make a day of it.  The abandoned turnpike is quite possibly the most unusual and most accessible of the many strange things afoot in Pennsylvania.  Nature is slowly reclaiming the roadway, and in time, only the tunnels will remain.  And being over a century old (from the fabled Southern Pennsylvania Railway), they too will at some point be reclaimed.

Once the movie gets released (limited release on 11/14, nationwide release “afterwards”) I’ll update to reference anything specific in the movie.  I haven’t found any trailers just yet, but once they’re out, I’ll add them here as well.